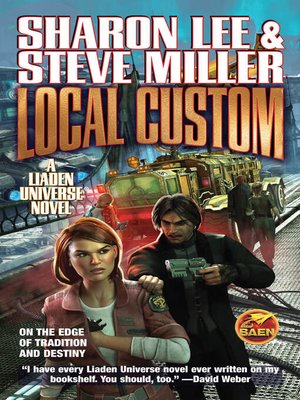 Each person shall provide his clan of origin with a child of his blood, who will be raised by the clan and belong to the clan. And this shall be Law for every person of every clan . . .

Master trader Er Thorn knows the local custom of Liaden is to be matched with a proper bride, and provide his prominent clan Korval with an heir. Yet his heart is immersed in another universe, influenced by another culture, and lost to a woman not of his world. And to take a Terran wife such as scholar Anne Davis is to risk his honor and reputation. But when he discovers that their brief encounter years before has resulted in the birth of a child, even more is at stake than anyone imagined. Now, an interstellar scandal has erupted, a bitter war between two families—galaxies apart—has begun, and the only hope for Er Thorn and Anne is a sacrifice neither is prepared to make . . .

Local Custom
Copy and paste the code into your website.
New here? Learn how to read digital books for free