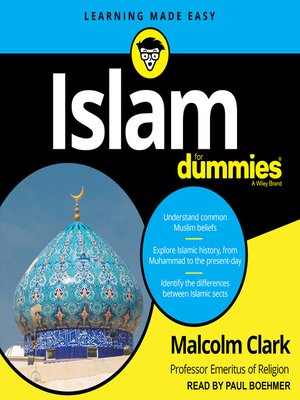 Religion & SpiritualitySociologyNonfiction
Many non-Muslims have no idea that Muslims worship the same God as Christians and Jews, and that Islam preaches compassion, charity, humility, and the brotherhood of man. And the similarities don't end there. According to Islamic teaching, Muhammad founded Islam in 610 CE after the angel Gabriel appeared to him at Mecca and told him that God had entered him among the ranks of such great biblical prophets as Abraham, Moses, and Christ. From the Qur'an to Ramadan, Islam for Dummies introduces you to the origins, practices and beliefs of Islam, including: Muhammad, the man and the legend;the Five Pillars of Wisdom; the Five Essentials beliefs of Islam; the different branches of Islam and Islamic sects; the Qur'an and Islamic law; and Islam throughout history and its impact around the world. Professor Malcolm Clark explores the roots of Islam, how it has developed over the centuries, and its long and complex relationship with Christianity. He helps puts Islam in perspective as a major cultural and geopolitical force.
Religion & SpiritualitySociologyNonfiction

Malcolm Clark taught in the department of religion at Butler University for thirty years. He is the author of Islam For Dummies.

More about Malcolm Clark
Islam for Dummies
Copy and paste the code into your website.
New here? Learn how to read digital books for free