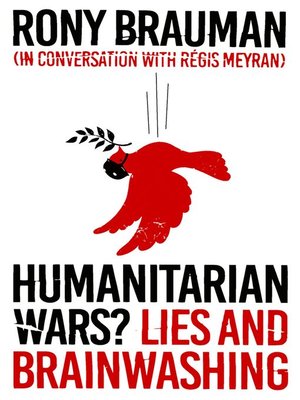 In the eyes of Rony Brauman of Médecins sans Frontières, wars are always triggered in the name of morality. Today's "humanitarian" interventions are little more than new moral crusades-and their justifications are based on lies. There are plenty of examples of hawkish propaganda in recent years: Saddam Hussein's mythical weapons of mass destruction; a dubious genocide in Kosovo; doctored figures of famine in Somalia; and a fake massacre of protesters in Libya. Without being militantly non-interventionist, Brauman is extremely suspicious of the thirst for war displayed by many of today's world leaders, the consequences of which are devastating. He is critical of international peacekeeping bodies and tribunals: the UN Security Council and the International Criminal Court represent, for him, the interests of the powerful before all else. Basing his argument on the criteria for a "just war," Brauman criticizes the Western obsession with imposing democratic values by force. In this sober and convincing book, he thoroughly dismantles the notion of the justness of "humanitarian wars."

Humanitarian Wars?
Copy and paste the code into your website.
New here? Learn how to read digital books for free