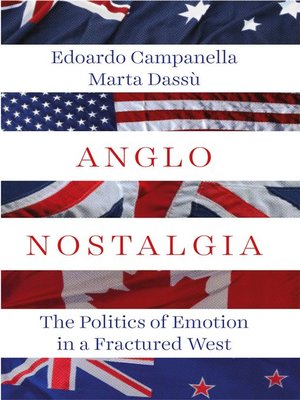 The Politics of Emotion in a Fractured West

Nostalgia has become a major force in global politics. While Donald Trump hopes to "make America great again," Xi Jinping calls for a "great rejuvenation of the Chinese people," and a majority of Russians still mourn the Soviet Union. But it is Brexit, with its idealization of a bygone era of full sovereignty, that epitomizes nostalgic nationalism in its purest form. Despite its romantic flavor, nostalgia is a malaise—a combination of paranoia and melancholy that idealizes the past, while denigrating the present. This epidemic of mythicizing national history is shaping politics in risky ways, fueled by ageing populations, shifts in the global order, and technological disruption. When deployed in the political debate, collective nostalgia is used as an emotional weapon, capable of mobilizing a nation towards illusory goals. Drawing on psychology, political science, history and popular culture, Anglo Nostalgia analyses the rapid spread of this global phenomenon, before focusing on Brexit as a case study. With the detachment of informed outsiders, Campanella and Dassù expose nostalgia's great danger: the oversimplification of reality, leading to unprecedented political miscalculations and rising geopolitical tensions.

Anglo Nostalgia
Copy and paste the code into your website.
New here? Learn how to read digital books for free