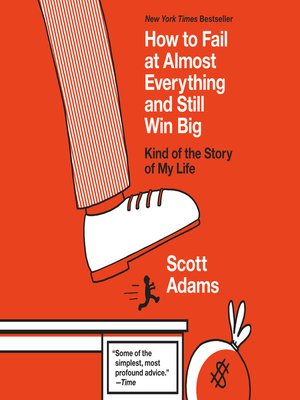 How to Fail at Almost Everything and Still Win Big

Kind of the Story of My Life

Biography & AutobiographyBusinessCareersNonfiction
Blasting clichéd career advice, the contrarian pundit and creator of Dilbert recounts the humorous ups and downs of his career, revealing the outsized role of luck in our lives and how best to play the system.
Scott Adams has likely failed at more things than anyone you've ever met or anyone you've even heard of. So how did he go from hapless office worker and serial failure to the creator of Dilbert, one of the world's most famous syndicated comic strips, in just a few years? In How to Fail at Almost Everything and Still Win Big, Adams shares the game plan he's followed since he was a teen: invite failure in, embrace it, then pick its pocket.
No career guide can offer advice that works for everyone. As Adams explains, your best bet is to study the ways of others who made it big and try to glean some tricks and strategies that make sense for you. Adams pulls back the covers on his own unusual life and shares how he turned one failure after another—including his corporate career, his inventions, his investments, and his two restaurants—into something good and lasting. There's a lot to learn from his personal story, and a lot of entertainment along the way. Adams discovered some unlikely truths that helped to propel him forward. For instance:

Scott Adams is the creator of Dilbert, one of the most popular comic strips of the past quarter century. He has been a full-time cartoonist since 1995, after 16 years as a technology worker for companies like Crocker National Bank and Pacific Bell...

More about Scott Adams
How to Fail at Almost Everything and Still Win Big
Copy and paste the code into your website.
New here? Learn how to read digital books for free