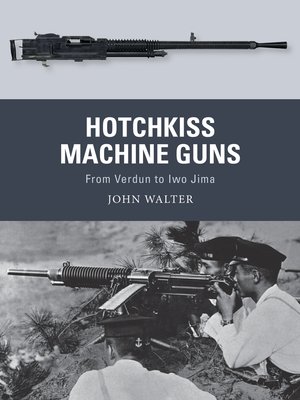 View more libraries...
Created by a long-forgotten Austrian nobleman, Adolf Odkolek von Augezd, the air-cooled Hotchkiss machine gun was the first to function effectively by tapping propellant gas from the bore as the gun fired. Although the Hotchkiss would be overshadowed by the water-cooled Maxim and Vickers Guns, it proved its effectiveness during the Russo-Japanese War. The gun, quirky though it was, was successful enough to persuade Laurence Benét and Henri Mercié to develop the Modèle Portative: a man-portable version which, it was hoped, could move with infantrymen as they advanced. Later mounted on tanks and aircraft, it became the first automatic weapon to obtain a 'kill' in aerial combat.
Though it served the French and US armies during World War I (and also the British in areas where French and British units fought alongside each other), the Odkolek-Hotchkiss system was to have its longest-term effect in Japan. Here, a succession of derivatives found favour in theatres of operations in which water-cooling could be more of a liability than an asset. When US forces landed on Saipan, Guam and Iwo Jima, battling their way from island to island across the Pacific, it was the 'Woodpecker' – the Type 92 Hotchkiss, with its characteristically slow rate of fire – which cut swathes through their ranks. Supported by contemporary photographs and full-colour illustrations, this title explores the exciting and eventful history of the first successful gas-operated machine gun.