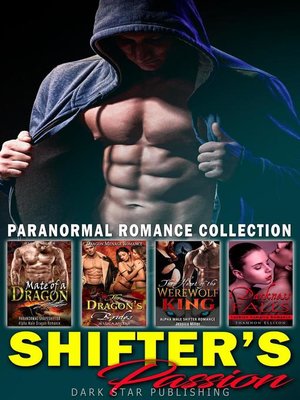 Mate of a Dragon Shifter

Brida has only ever known war — her people have been fighting a bloodthirsty feud with their neighbors since before her birth. When at last her father finds a solution, it comes at a cost: a man named Cynric will use his extraordinary powers to conquer their enemy, if her father pays a king's ransom in gold.

When the time comes to pay and funds fall flat, Ulric offers Brida instead. Brida, of course, hasn't the heart to argue with the salvation of her homeland — but will her heart come to love the source of that salvation, even when she discovers the beast within him?

Tobin James has a secret that makes life pretty tough for him. On the outside he is handsome, strong, and charming – everything a girl could want from a guy. On the inside, though, Tobin has a beast raging to emerge in more ways than one. Because of his constant struggle with his secret, Tobin has never called any one place home for very long. Will this all change after he answers an ad for a farmhand and meets Clara Gibson and her girlfriend, Estelle Creek? Both women find something lacking in their relationship and with Tobin around things only become more confusing and tense.

All three must confront their deepest desires to fix the problems, but secrets, insecurities, and outright recklessness puts the happy home at risk. To make matters worse, there has been a rash of sheep being torn apart by wild animals keeping everyone on edge. Is there a way everyone can have their cake and eat it too? Or will Tobin's next journey to find a place to belong begin much sooner than he realized?

The Heart of the Werewolf King

Katrina's friend gets a password to an underground nightclub that is considered legendary for its parties. It is only open on Wiccan holidays. The two girls find themselves in a club packed with supernatural beings, and humans that they have lured there. It is overseen by a Wiccan priestess, who is sitting on a dais with the king of werewolves. The king, struck by Katrina's beauty, comes down and talks to her. She responds with sass, not knowing his importance.
The club is attacked by a vampire coven, and the king rescues Katrina. He brings her to the werewolves' lair. He cannot let her go, since she will be targeted by the vampires.
The king tells her his life story, and finding herself attracted, Katrina ends up sleeping with the king. The next day, he is gone. She goes looking for him, getting help from another wolf.
She joins in the battle, and he is upset that she is there. He is overruled, and when she is kidnapped by a vampire, he goes after them. She rescues herself, and he arrives in time to take her home. When Katrina wakes up the next day, he is gone.
Heartbroken, she finds out that she is pregnant. Determined to find him, she locates the underground club, even though it takes her several months to do so. When he sees her, they reunite.

Shifter's Passion
Copy and paste the code into your website.
New here? Learn how to read digital books for free