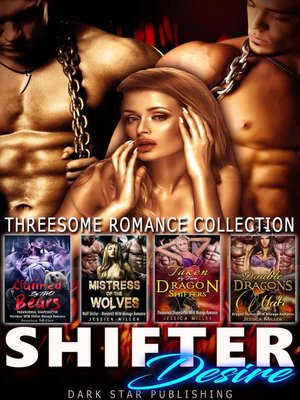 Elizabeth is a bright college student at Dillard college in New Orleans, Louisiana on an environmental internship. She's studying the endangered black bear population when she has her first encounter with Louisiana voodoo culture. She brushes it off as a parlor trick and soon forgets it when she meets Jake, a handsome Louisiana man with a knack for communicating with and tracking bears. While appreciating his talent, Elizabeth soon leaves him because Jake starts making claims that his reason for finding the bears is because he can transform into a bear himself.

As a scientist, Elizabeth tries not to let the supernatural undercurrent of the Cajun city dull her judgment. When Jake's handsome friend Chris enters the picture things get messier as Elizabeth wrestles with the supernatural and her building feelings for two men who may or may not have magical powers.

When Elizabeth upsets a voodoo priestess, she and the men must run for their lives into the woods. The time alone in the woods makes Elizabeth wonder if she has to choose between Jake and Chris—or if she can have them both?

Mistress of the Wolves

Mia, hoping to bond with fellow bridesmaids, plans a weekend trip into the deep woods of northern Florida. Her old high school best friend, Cora, is getting married and though Cora can't make the trip, she encourages all of the women to bond without her.

The trip is off to a rough start because only Mia is an outdoorsy girl. The trip takes a huge turn for the worse when Mia starts hearing wolves. Mia, a Florida girl, is confused because there are no wolves in Florida. The other bridesmaids start to worry too, and Mia tries to assure them that they are safe. They are not safe. The wolves ambush them.

Mia manages to get away when she's helped by two larger wolves who can talk. Mia and her two saviors are outnumbered and she quickly realizes that the wolves chasing her aren't just any wolves, they are werewolves and will stop at nothing to get her. Even worse, her best friend Cora may be responsible.

Stephanie had finished a long day at work and just made it back home. That was when she saw Micah walking up her drive. He was mysterious and handsome, but he wasn't there simply to chat. Before she knew it, Micah made her unconscious and stole her away.

She woke up in a strange mansion in the woods. There, Stephanie was informed that she was to marry a stranger, someone whom Micah called Prince Tristan; a dragon shifter. Stephanie is introduced to the world of dragon shifters and she finds herself falling for both Tristan and Micah. Can Stephanie ever have both men, especially as she is supposed to marry one of them? Will she get to express her passion for both Tristan and Micah?

Emily is the heir to her dragon shifter clan, but before she can rule she must choose a mate. Her mother has lined up a number of suitors for her to choose from, but Emily finds herself inexplicably drawn to two of them. Rune is the son of her father's Second and Luke is the best fighter in the clan. Not to mention both are scorchingly handsome.

But Emily has to choose between the two and as they both court her, her decision becomes hazy. It's hard not to feel deeply for both Luke and Rune and they don't make it easy for Emily. Will she make the right choice in the end? Or is there a...

Shifter Desire
Copy and paste the code into your website.
New here? Learn how to read digital books for free