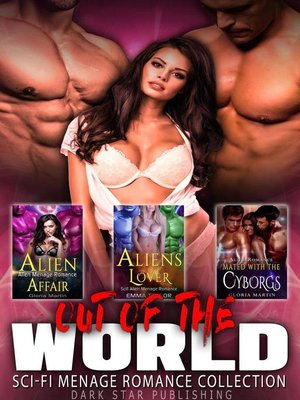 Out of the World

Melissa Mac is assistant to Ambassador Rosanna Torrance and is about to enter a posting on an exciting new planet called Ilona. When the welcoming ceremony is disrupted by separatists her boss is left unconscious and she is a stranger in a strange land.
When she meets her two liaison officers she finds their charms hard to resist. The world of Ilona is different in many ways. Scantily dressed, good looking aliens with permissive attitudes are also hard to resist. Except the Ilona attitudes are the exact reason her people are fighting against such an alliance. She is caught between a rock and a hard place, and since her rank is of lower class there is not much she believes she can do.
With the help of the captain of the guard Melissa finds there are things she can do to fight the strife they are facing. With the help of her liaison officers she finds she can be the woman she wants to be.
If anyone will let her!

Samantha Fitzgerald has what she sees as a mundane, normal life. She lives in a city that is perpetually blanketed in snow, works a job where she is not appreciated or even noticed, and has only ever been with two men. She only has one friend and she is a "late-blooming orphan".

Then she starts to see the spaceship in the sky. It is a huge UFO, but nobody else can see it. There is nothing on the news and there is no widespread panic. There can only be one conclusion: she is crazy. And when she hears the voices telling her to go into the country, she is sure she is getting even crazier.

Then she meets Bak and Ras, blue-skinned aliens who have travelled from another galaxy to be with her. Why do these aliens want her so badly? Can she love men who aren't human? Can she really leave Earth with them and journey across the stars?

Emma Taylor is an avid reader and vivid writer who enjoys writing romance novellas, particularly in fantasy and paranormal subgenres. She wrote her first story at the age of 14 and has written continuously ever since, mostly for fun. She is now ha...

More about Emma Taylor
Out of the World
Copy and paste the code into your website.
New here? Learn how to read digital books for free