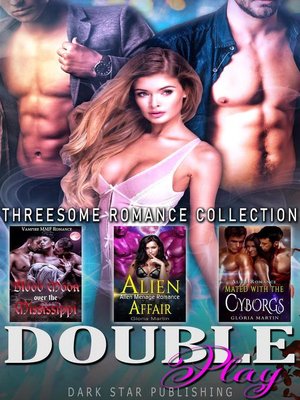 Blood Moon over the Mississippi

The year is 1923, and Violet Miller, muse to the artists of New York and Europe, socialite and actress, arrives New Orleans. Tired of the grey monoliths of Manhattan, she goes in search of the country life and a taste of jazz and creole spice. A life of anonymity amongst ornate cast iron porches and sweet flower blossoms.

When an uninvited guest invades her sanctuary, Violet is thrown into the world of New Orleans after dark. The taste of dangerous cocktails, voodoo magic, and encounters with creatures of the night draw her away from the light of day into the embrace of conjure men and vampires. Will she sacrifice her life and succumb to the deadly allure of the moonless night?

Melissa Mac is assistant to Ambassador Rosanna Torrance and is about to enter a posting on an exciting new planet called Ilona. When the welcoming ceremony is disrupted by separatists her boss is left unconscious and she is a stranger in a strange land.
When she meets her two liaison officers she finds their charms hard to resist. The world of Ilona is different in many ways. Scantily dressed, good looking aliens with permissive attitudes are also hard to resist. Except the Ilona attitudes are the exact reason her people are fighting against such an alliance. She is caught between a rock and a hard place, and since her rank is of lower class there is not much she believes she can do.
With the help of the captain of the guard Melissa finds there are things she can do to fight the strife they are facing. With the help of her liaison officers she finds she can be the woman she wants to be.
If anyone will let her!

Double Play
Copy and paste the code into your website.
New here? Learn how to read digital books for free