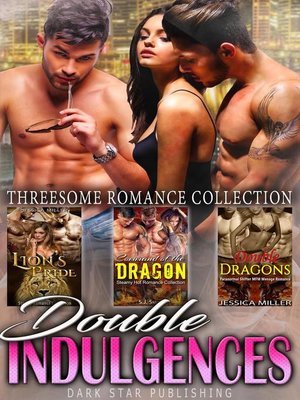 Nora and Safir are ready to have a great summer together. Safir is sure Nora is destined to be his mate, and Nora thinks the same, until an outsider pride of lion shifters moves into Safir's territory. It isn't long before Weston, the leader of the outsider shifters, kidnaps Nora and holds her captive away from Safir's reach.

Nora wants to hold steadfast to her relationship with Safir, but she soon comes to realize that Weston isn't a threat to her at all. She also starts to gain very real feelings for him and doesn't know how to handle it all. But when Safir finally finds where Weston has been keeping her she isn't prepared for the outcome that ultimately ensues between the three of them.

Command of the Dragon

Money and power is everything to a kingdom of a fierce and advanced dragon shifters, who rule over a humans-only populated city far below. Young and beautiful Arielle, a human with a powerful gift, has a secret wish to convince the dragons to one day accept humans among their own kind. But, human families are in awe of the dragons, who make their way down to the city every week, rounding up talent to bring back to their kingdom to use for their entertainment.
Prince Zefelli, a member of an elite dragon clan, feels differently from his fellow kind about the harsh treatment of humans. He and his best friend become entangled in an adventure with Arielle one night; each separately seeking refuge from the way of their twisted worlds. The three embark on an unexpected journey that ultimately leads them to the meaning of true love.

Stacie Simmons has been dreaming of flying. For months she has dreamt of soaring through the clouds, looking down on America. The dreams are so vivid she often thinks they are real, more real than her life as a call-center worker, more real than her mundane life where not much happens.

Then Joshua Mathewson and a man named after a Viking, Ragnar, come into her life. They tell her she is a half-scale and they are here to assist her through the transformation. They are hot, muscled, sexy men, and Stacie is intrigued in spite of herself. Her mind tells her to report these strange men, but her body screams out for them.

But the dreams sometimes end horribly, with Stacie falling to the earth. And a man at her work, Michael, has begun to stalk her. Through it all, Stacie just hopes one thing; that she can get through the sexy, mysterious men, the crazy co-worker, and the psychotic dreams in one piece.

Double Indulgences
Copy and paste the code into your website.
New here? Learn how to read digital books for free