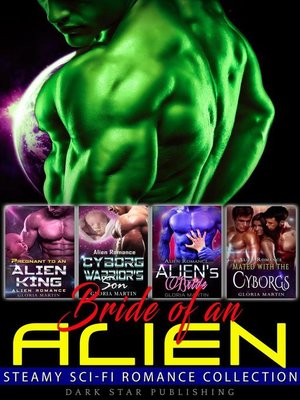 Bride of an Alien

Pregnant to an Alien King

Jesper, newly crowned king of planet Abalon, was celebrating. He'd finally ascended the throne and the entire capital city was celebrating with him. Rockwell, Jasper's close friend and High General suggested that they should have one last wild night and do something they wouldn't normally. Something out of their world…of course this leads two tipsy Abalonians to Earth. When Jesper sees Clarice and has to have her.

They spend one fateful night together and Jesper returns to Abalon the next day with nothing but a sweet memory. Or so he thinks. Several months later, when it's discovered that an Abalonian child was born to a human, everything changes for King Jesper, as well as Clarice who finds herself whisked away to an entirely different planet.

Gem had just been picked to be the next bride of her planet's Warrior King. Life was supposed to have been perfect already… until she was suddenly transported to twenty years ago on planet Earth!
It was one thing to be an alien pretending to be a human being on a beautiful remote island. It was another to actually fall in love with a local. From the very moment that she'd laid eyes on Cliff, a simple artist and cottage owner, her heart began beating differently for the very first time.
Unfortunately, their love story didn't last long. The Warrior King suddenly appeared one day and took Gem back. He went further into the future when they were already married. Gem was shocked to learn that Cliff had actually time-traveled to follow her, but had been stopped by the king. Fearing for his life, she searched for a way to turn back the hands of time again and save him- even if it meant not seeing him again for the rest of her life.
Will Gem save her first real love? Or will destiny allow them a way to be together across space and time?

Bride of an Alien
Copy and paste the code into your website.
New here? Learn how to read digital books for free