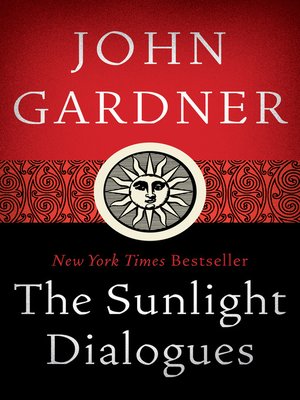 John Gardner's sweeping portrait of the collision of opposing philosophical perspectives in 1960s America, centering on the appearance of a mysterious stranger in a small upstate New York town One summer day, a countercultural drifter known only as the Sunlight Man appears in Batavia, New York. Jailed for painting the word "LOVE" across two lanes of traffic, the Sunlight Man encounters Fred Clumly, a sixty-four-year-old town sheriff. Throughout the course of this impressive narrative, the dialogue between these two men becomes a microcosm of the social unrest that epitomized America during this significant historical period—and culminates in an unforgettable ending. Beautifully expansive and imbued with exceptional social insight, The Sunlight Dialogues is John Gardner's most ambitious work and established him as one of the most important fiction writers in post–World War II America. This ebook features a new illustrated biography of John Gardner, including original letters, rare photos, and never-before-seen documents from the Gardner family and the University of Rochester Archives.

John Gardner (1933–1982) was born in Batavia, New York. His critically acclaimed books include the novels Grendel, The Sunlight Dialogues, and October Light, for which he received the National Book Critics Circle Award, as well as several works of...

More about John Gardner
The Sunlight Dialogues
Copy and paste the code into your website.
New here? Learn how to read digital books for free