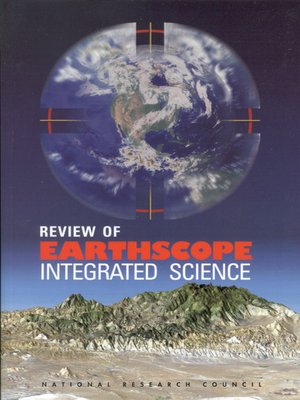 EarthScope is a major science initiative in the solid-earth sciences and has been described as "a new earth science initiative that will dramatically advance our physical understanding of the North American continent by exploring its three-dimensional structure through time". The initiative proposes to cover the United States with an array of instruments created to reveal how the continent was put together, how the continent is moving now, and what lies beneath the continent. The initiative is made of four components, three of which are funded by the Major Research Equipment program of the National Science Foundation (NSF) and one of which is mostly associated with the National Aeronautics and Space Administration (NASA).

In response to a request by the NSF, the National Research Council (NRC) established a committee to review the science objectives and implementation planning of the three NSF components, United States Seismic Array (USArray), the Plate Boundary Observatory (PBO), and the San Andreas Fault Observatory at Depth (SAFOD). The committee was charged with answered four specific questions: Is the scientific rationale for EarthScope sound, and are the scientific questions to be addressed of significant importance?, Is there any additional component that should be added to the EarthScope initiative to ensure that it will achieve its objective of a vastly increased understanding of the structure, dynamics, and evolution of the continental crust of North America?, Are the implementation and management plans for the three elements of EarthScope reviewed here appropriate to achieve their objectives?, and Have the appropriate partnerships required to maximize the scientific outcomes from EarthScope been identified in the planning documents?