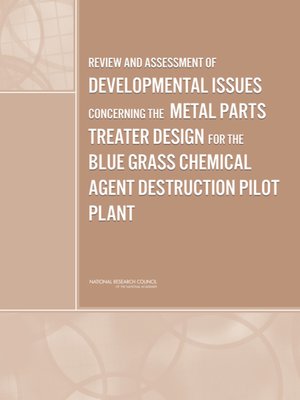 The United States is in the process of destroying its chemical weapons stockpile. In 1996, Congress mandated that DOD demonstrate and select alternative methods to incineration at the Blue Grass and Pueblo sites. The Assembled Chemical Weapons Alternatives (ACWA) program was setup to oversee the development of these methods, and pilot plants were established at both sites. One of the new technologies being developed at the Blue Grass pilot plant are metal parts treaters (MPTs) to be used for the empty metal munitions cases. During recent testing, some issues arose with the MPTs that caused the ACWA to request a review by the NRC to investigate and determine their causes. This book presents a discussion of the MPT system; an assessment of the MPT testing activities; an analysis of thermal testing, modeling, and predicted throughput of the MPT; and an examination of the applicability of munitions treatment units under development at Pueblo for the Blue Grass pilot plant.