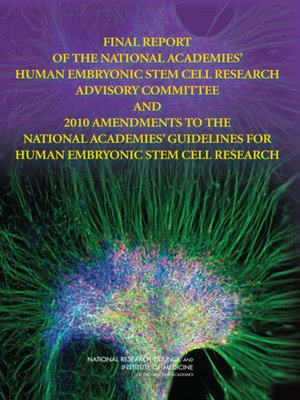 In 2005, the National Academies released the book, Guidelines for Human Embryonic Stem Cell Research, which offered a common set of ethical standards for a field that, due to the absence of comprehensive federal funding, was lacking national standards for research. In order to keep the Guidelines up to date, given the rapid pace of scientific and policy developments in the field of stem cell research, the Human Embryonic Stem Cell Research Advisory Committee was established in 2006 with support from The Ellison Medical Foundation, The Greenwall Foundation, and the Howard Hughes Medical Institute.

As it did in 2007 and 2008, the Committee identified issues that warranted revision, and this book addresses those issues in a third and final set of amendments. Specifically, this book sets out an updated version of the National Academies' Guidelines, one that takes into account the new, expanded role of the NIH in overseeing hES cell research. It also identifies those avenues of continuing National Academies' involvement deemed most valuable by the research community and other significant stakeholders.