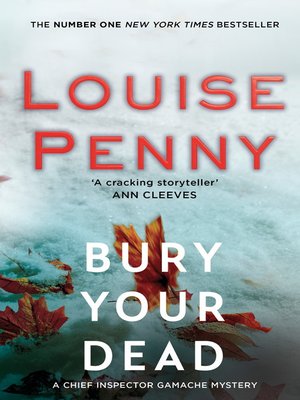 View more libraries...
The multi-award-winning novel from worldwide phenomenon and number one New York Times bestseller Louise Penny, and the sixth book in the Chief Inspector Armand Gamache series
As Quebec City shivers in the grip of winter, its ancient stone walls cracking in the cold, Chief Inspector Armand Gamache plunges into the strangest case of his celebrated career. A man has been brutally murdered in one of the city's oldest buildings - a library where the English citizens of Quebec safeguard their history. And the death opens a door into the past, exposing a mystery that has lain dormant for centuries . . . a mystery Gamache must solve if he's to catch a present-day killer.Steeped in luscious atmosphere, brimming with the suspense and wit that have earned Louise Penny a massive global following, BURY YOUR DEAD is an ingenious suspense novel.'Penny's best book to date . . . A stunner' Stephen Booth'A cracking storyteller, who can create fascinating characters, a twisty plot and wonderful surprise endings' Ann Cleeves