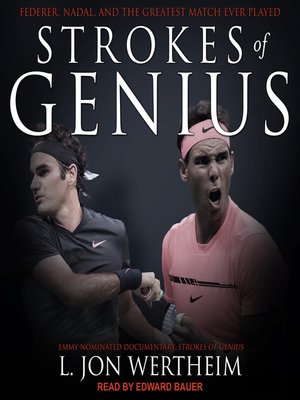 Federer, Nadal, and the Greatest Match Ever Played

Biography & AutobiographySports & RecreationsNonfiction
In the 2008 Wimbledon men's final, Center Court was a stage set worthy of Shakespearean drama. Five-time champion Roger Federer was on track to take his rightful place as the most dominant player in the history of the game. He just needed to cling to his trajectory. So in the last few moments of daylight, Center Court witnessed a coronation. Only it wasn't a crowning for the Swiss heir apparent but for a swashbuckling Spaniard. Twenty-two-year-old Rafael Nadal prevailed, in five sets, in what was, according to the author, "essentially a four-hour, forty-eight-minute infomercial for everything that is right about tennis-a festival of skill, accuracy, grace, strength, speed, endurance, determination, and sportsmanship." It was also the encapsulation of a fascinating rivalry, hard fought and of historic proportions. Strokes of Genius deconstructs this defining moment in sport, using that match as the backbone of a provocative, thoughtful, and entertaining look at the science, art, psychology, technology, strategy, and personality that go into a single tennis match. With vivid, intimate detail, Wertheim re-creates this epic battle in a book that is both a study of the mechanics and art of the game and the portrait of a rivalry as dramatic as that of Ali-Frazier, Palmer-Nicklaus, and McEnroe-Borg.
Biography & AutobiographySports & RecreationsNonfiction

L. Jon Wertheim is a senior writer for Sports Illustrated and the author of several books, including Blood in the Cage, a chronicle of the rise of mixed martial arts, and Running the Table, about a bipolar pool hustler named Kid Delicious. His wor...

More about L. Jon Wertheim
Strokes of Genius
Copy and paste the code into your website.
New here? Learn how to read digital books for free