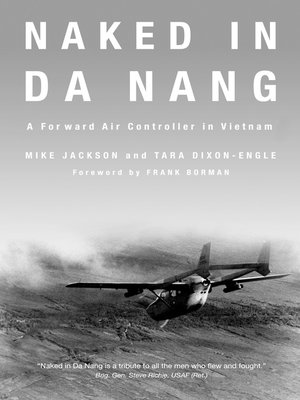 FACs (forward air controllers) in Vietnam flew low and slow, searching for signs of an elusive enemy. Often they trolled themselves as bait for the NVA troops to try to shoot down. When a friendly unit made contact, having a FAC overhead made their day because the FACs controlled the bomb-, rocket-, and napalm-laden fast movers, fighter jets and attack aircraft whose ordnance often made the difference between life and death. They were regarded by many of their airforce and naval aviator brethren as insane, suicidal, or both. In addition to the perils of enemy fire which ranged from lucky AK-47 shots to .51 caliber machine guns and SA-7 shoulder-fired surface-to-air missiles, you had to watch out to keep from being blown up in a B-52 Arc-Light strike or knocked down by friendly artillery. As the title suggests, however, Naked in Da Nang is not an angst ridden account of mortal combat. Following in the footsteps of Richard Hooker's classic M*A*S*H: A Novel About Three Army Doctors, author Jackson has a keen eye for the absurdities that abound in a combat zone. That the humor is often dark only serves to sharpen its comic edge.- These pilots were considered the "Guardian Angels" of the Vietnam ground soldier- Refers to the "unarmed" nature of FAC (Forward Air Controllers) aircraft- Low-tech aircraft that survived combat on pilot skills only