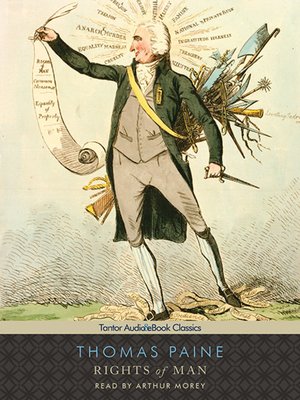 HistoryPoliticsNonfiction
Rights of Man presents an impassioned defense of the Enlightenment principles of freedom and equality that Thomas Paine believed would soon sweep the world. He boldly claimed, "From a small spark, kindled in America, a flame has arisen, not to be extinguished. Without consuming...it winds its progress from nation to nation." Though many more sophisticated thinkers argued for the same principles and many people died in the attempt to realize them, no one was better able than Paine to articulate them in a way that fired the hopes and dreams of the common man and actually stirred him to revolutionary political action.
HistoryPoliticsNonfiction

Thomas Paine (1737-1809) was an author, radical, inventor, intellectual, revolutionary, and one of the Founding Fathers of the United States. He is best remembered as the highly popular pamphleteer whose incendiary Common Sense was largely respons...

More about Thomas Paine
Rights of Man
Copy and paste the code into your website.
New here? Learn how to read digital books for free