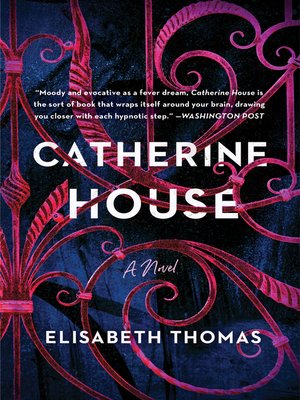 "Moody and evocative as a fever dream, Catherine House is the sort of book that wraps itself around your brain, drawing you closer with each hypnotic step." – THE WASHINGTON POST

A gothic-infused debut of literary suspense, set within a secluded, elite university and following a dangerously curious, rebellious undergraduate who uncovers a shocking secret about an exclusive circle of students . . . and the dark truth beneath her school's promise of prestige.

Trust us, you belong here.

Catherine House is a school of higher learning like no other. Hidden deep in the woods of rural Pennsylvania, this crucible of reformist liberal arts study with its experimental curriculum, wildly selective admissions policy, and formidable endowment, has produced some of the world's best minds: prize-winning authors, artists, inventors, Supreme Court justices, presidents. For those lucky few selected, tuition, room, and board are free. But acceptance comes with a price. Students are required to give the House three years—summers included—completely removed from the outside world. Family, friends, television, music, even their clothing must be left behind. In return, the school promises a future of sublime power and prestige, and that its graduates can become anything or anyone they desire.

Among this year's incoming class is Ines Murillo, who expects to trade blurry nights of parties, cruel friends, and dangerous men for rigorous intellectual discipline—only to discover an environment of sanctioned revelry. Even the school's enigmatic director, Viktória, encourages the students to explore, to expand their minds, to find themselves within the formidable iron gates of Catherine. For Ines, it is the closest thing to a home she's ever had. But the House's strange protocols soon make this refuge, with its worn velvet and weathered leather, feel increasingly like a gilded prison. And when tragedy strikes, Ines begins to suspect that the school—in all its shabby splendor, hallowed history, advanced theories, and controlled decadence—might be hiding a dangerous agenda within the secretive, tightly knit group of students selected to study its most promising and mysterious curriculum.

Combining the haunting sophistication and dusky, atmospheric style of Sarah Waters with the unsettling isolation of Kazuo Ishiguro's Never Let Me Go, Catherine House is a devious, deliciously steamy, and suspenseful page-turner with shocking twists and sharp edges that is sure to leave readers breathless.