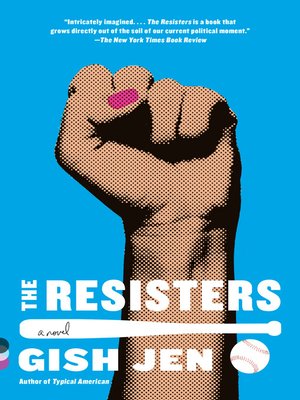 View more libraries...
“A dystopia so chillingly plausible that an entire review could be spent simply describing its components.... Marvelous.”  —The Boston Globe

The time: not so long from now. The place: AutoAmerica, a country surveilled by one “Aunt Nettie,” a Big Brother that is part artificial intelligence, part internet, and oddly human—even funny. The people: divided. The “angelfair” Netted have jobs and, what with the country half under water, literally occupy the high ground. The Surplus live on swampland if they’re lucky, on water if they’re not.

The story: To a Surplus couple—he once a professor, she still a lawyer—is born a girl, Gwen, with a golden arm. Her teens find her happily playing in an underground baseball league, but when AutoAmerica faces ChinRussia in the Olympics, Gwen finds herself in dangerous territory, playing ball with the Netted even as her mother battles this apartheid-like society in court.

The Resisters is the provocative, moving, and paradoxically buoyant story of one family struggling to maintain their humanity in circumstances that threaten their every value.