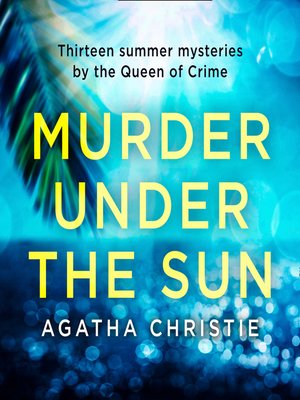 Murder Under the Sun

13 Summer Mysteries by the Queen of Crime

Classic LiteratureFictionSuspenseThriller
Get away from it all with this selection of mid-summer murders by Agatha Christie, read by television's Captain Hastings, the actor and novelist Hugh Fraser! Summer. Holiday season. A time for rest and relaxation. But murder can strike anywhere, as this selection of an 'unlucky thirteen' mysteries by Agatha Christie proves. Join Hercule Poirot, Christopher Parker Pyne, Harley Quin and James Bond on this special holiday-themed collection, and take a dip into these short stories, perfect for killing time on the beach, by the pool – or at home, when planning to get away from it all. STORIES IN THIS COLLECTION:
Classic LiteratureFictionSuspenseThriller

Agatha Christie is known throughout the world as the Queen of Crime. Her books have sold over a billion copies in English with another billion in over 70 foreign languages. She is the most widely published author of all time and in any language, o...

More about Agatha Christie
Murder Under the Sun
Copy and paste the code into your website.
New here? Learn how to read digital books for free