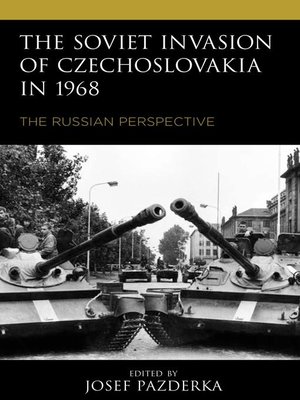 The Soviet Invasion of Czechoslovakia in 1968

HistoryNonfiction
The edited collection is the first attempt to take a more coherent look at the Russian perception of the Prague Spring and the Warsaw Pact occupation of Czechoslovakia in August 1968. The publication is therefore a collection of interviews, memoirs and academic studies focusing on Russian soldiers, dissidents and journalists involved in and affected by the Soviet invasion.
The book begins with a focus on the Soviet soldiers who came to Czechoslovakia. It depicts their inner world and the mighty machinery of the Soviet propaganda to which they were exposed.
The Archive supplement offers a fresh look at the role of KGB and the Soviet embassy in the Czechoslovak events of August 1968 by Russian historians Nikita Petrov and Olga Pavlenko.
The second part presents the Soviet journalists living in Prague in 1968 who supported the Prague Spring and subsequently paid for their stance by being deported and losing their job.
The last part of the book focuses on the kinship that the Soviet liberal intelligentsia and dissident movement, which emerged while Leonid Brezhnev was tightening the screws in the USSR in late 1960s, felt toward events in Prague, which for them represented one of the last hopes for change. It begins with the study of the Czech researcher Tomas Glanc exploring the different reactions on Prague Spring and August 1968 invasion among the Soviet inteligentsia. Interviews with former Soviet dissidents Lyudmila Alexeeva and Natalia Gorbanevskaya follow. As a supplement, the diary of the ordinary Soviet citizen Elvira Filipovich – a Russian biologist married to a Czech who witnessed the August 1968 in Moscow - is included.
HistoryNonfiction

Josef Pazderka is editor-in-chief and lead Czech historian and journalist of Aktualne.

The Soviet Invasion of Czechoslovakia in 1968
Copy and paste the code into your website.
New here? Learn how to read digital books for free