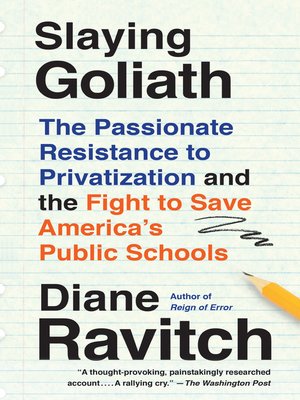 View more libraries...
From one of the foremost authorities on education in the United States, Slaying Goliath is an impassioned, inspiring look at the ways in which parents, teachers, and activists are successfully fighting back to defeat the forces that are trying to privatize America’s public schools.

Diane Ravitch writes of a true grassroots movement sweeping the country, from cities and towns across America, a movement dedicated to protecting public schools from those who are funding privatization and who believe that America’s schools should be run like businesses and that children should be treated like customers or products.

Slaying Goliath is about the power of democracy, about the dangers of plutocracy, and about the potential of ordinary people—armed like David with only a slingshot of ideas, energy, and dedication—to prevail against those who are trying to divert funding away from our historic system of democratically governed, nonsectarian public schools. Among the lessons learned from the global pandemic of 2020 is the importance of our public schools and their teachers and the fact that distance learning can never replace human interaction, the pesonal connection between teachers and students.