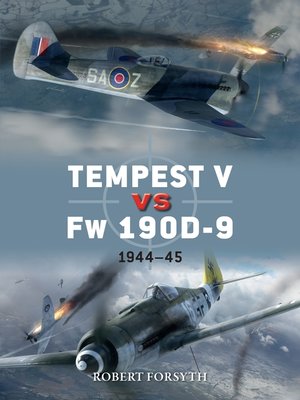 HistoryMilitaryNonfiction
Arguably two of the finest piston-engined fighters ever built, the Tempest V and Fw 190D-9 raised the bar in terms of aircraft design and operational capability during World War II. The long-nosed 'Dora 9', designed by Kurt Tank, first appeared in the skies over the Western and Eastern Fronts in the late summer of 1944. Fast, and with an exceptional rate of climb, it quickly bettered almost every fighter that the RAF, USAAF and Soviet Red Air Force could field.
The Hawker Tempest V entered service in early 1944, initially proving itself a stalwart performer when it was deployed to intercept V1 flying bombs over southern England. From the autumn of 1944, the Tempest V also equipped squadrons of the 2nd Tactical Air Force, operating in support of the Allied armies advancing across north-west Europe. It became a potent ground-attack aircraft, armed with underwing rockets, but also a first-class interceptor when pitted against the Luftwaffe's advanced Fw 190D-9 and Me 262.
Featuring full colour artwork, this book describes in fascinating detail combats between the Tempest Vs of No 274 Sqn and the Fw 190D-9s of I. and III./JG 26 between February and April 1945.
HistoryMilitaryNonfiction

Robert Forsyth is an author, editor and publisher, specialising in military aviation and military history. Born in Berkshire, England, he is the author of several books on the aircraft and units of the Luftwaffe, an interest he has held since boyh...

Tempest V vs Fw 190D-9
Copy and paste the code into your website.
New here? Learn how to read digital books for free