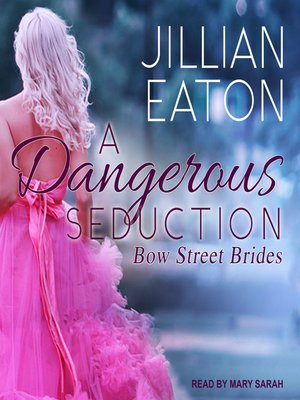 FictionLiteratureRomanceHistorical Fiction
A MURDER . . . When Lady Scarlett Sherwood's husband is killed in a riding accident that turns out to be no accident at all, she becomes the number one suspect in a murder investigation that takes the ton by storm. Her accuser? None other than the dark, ruthless Sir Owen Steel, Captain of the Bow Street Runners . . . and the only man Scarlett has ever loved. A BETRAYAL . . . Owen was just the poor son of a baker when Scarlett spurned him for a highborn lord. Now he is one of the most powerful men in England, but he never forgot the woman who left him humiliated and heartbroken. He always vowed he would make Scarlett pay for her treacherous betrayal, and what better way to seek revenge than to see her imprisoned for murder? A DANGEROUS SEDUCTION . . . But old passions are hard to ignore, and one kiss is all it takes for Owen and Scarlett's sizzling chemistry to be reignited. Soon they find themselves swept up in an affair that could have dangerous consequences for them both. Because there is still a murderer on the loose, and he's just found his next victim . . . Contains mature themes.
FictionLiteratureRomanceHistorical Fiction

More about Jillian Eaton
A Dangerous Seduction
Copy and paste the code into your website.
New here? Learn how to read digital books for free