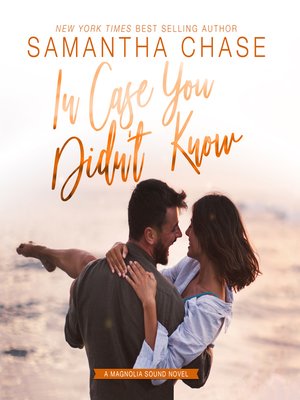 In Case You Didn't Know

Golden child Mason Bishop has finally had enough. Tired of bearing the weight of his parents' expectations, he's determined to break free and forge his own path. It's time for him to go after the things he really wants—including the girl he never forgot.

Scarlett Jones is done being ruled by her insecurities. She's ready to be seen as something other than one of the guys, and she's done thinking she's not good enough for the social elite—especially the Bishops. When Mason runs into Scarlett at a concert, he believes it's fate bringing them together. But fate only gets you so far. If he wants a real chance with Scarlett, it's going to take a whole lot of charm to convince her he's worth it.

Samantha Chase is a New York Times and USA Today bestseller of contemporary romance with more than forty titles under her belt! When she's not working on a new story, she spends her time reading romances, playing way too many games of Scrabble or ...

More about Samantha Chase
In Case You Didn't Know
Copy and paste the code into your website.
New here? Learn how to read digital books for free