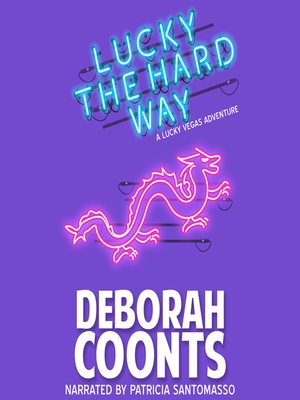 For Lucky O'Toole, living with murder is, well...murder.

As the Chief Problem Solver for the Babylon, Las Vegas's most over-the-top destination, mischief is in her job description, but murder? Not so much...until recently...

Facing a murder indictment, Lucky's first love, Teddie, has flown to Macau on the heels of the real killer.

A powerful figure in the Macanese underworld has Lucky's father and his empire over a barrel.

Lucky's own hotel is days away from opening.

And her engagement is very new.

So, there's only one thing for Lucky to do...

Take a trip to Macau.

She has five days to catch a killer, save Teddie, and rescue her empire from financial ruin.

Piece of cake for someone with Lucky's superpowers...

A light, funny, romantic mystery providing a Vegas escape appropriate for anyone looking for a good laugh. Get your copy today!

AN INTERVIEW WITH DEBORAH COONTS

Why did you decide to write humor?

I'm not sure I decided to add snark to the Lucky, books, specifically to Lucky's own voice, it just happened that way. When I was a kid, my mouth always got me into trouble. Finally, I've found a way to harness the sarcasm for the Forces of Good—or at least in a way not to anger my grandmother. And when Lucky started talking to me, she had a strong dose of sass in her.

The Lucky O'Toole Vegas Adventure series is hard to categorize. Is that by design?

When I set out to write Wanna Get Lucky?, I knew I wanted to write a romp through Las Vegas. I had the characters and the setting but no real understanding of narrative drive. So, I threw a young woman out of a tour helicopter into the middle of the Pirate Show and let the story unfold. A bit of murder to keep the plot moving, some wisecracking and Vegas mischief to make you laugh, and some romance to keep it interesting. A bit of a mash up, but it works.

"Get ready to win big—with a novel that will keep you glued to the pages all the way to the end." - Brenda Novak, New York Times & USA Today bestselling author

"More fun than a winning streak in Vegas. Lucky O'Toole is a character with brains, beauty, and a wry sense of humor. Readers will want to meet her again—and soon." - Di