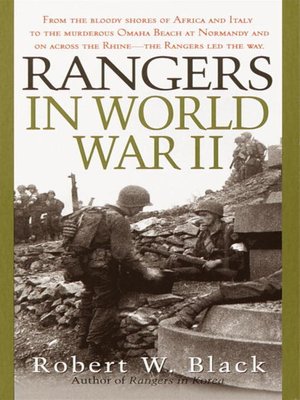 Biography & AutobiographyHistoryMilitaryNonfiction
From the deadly shores of North Africa to the invasion of Sicily to the fierce jungle hell of the Pacific, the contribution of the World War II Ranger Battalions far outweighed their numbers. They were ordinary men on an extraordinary mission, experiencing the full measure of the fear, exhaustion, and heroism of combat in nearly every major invasion of the war. Whether spearheading a landing force or scouting deep behind enemy lines, these highly motivated, highly trained volunteers led the way for other soldiers — they were Rangers.
With first-person interviews, in-depth research, and a complete appendix naming every Ranger known to have served, author Robert Black, a Ranger himself, has made the battles of WWII come to life through the struggles of the men who fought to win the greatest war the world has ever seen.
Biography & AutobiographyHistoryMilitaryNonfiction

Robert W. Black is a retired US Army colonel who served in Vietnam and with the 8th Ranger Infantry Company (Airborne) in the Korean War. Parachute and glider qualified, twice the recipient of the combat Infantry Badge, he was awarded the Silver S...

More about Robert W. Black
Rangers in World War II
Copy and paste the code into your website.
New here? Learn how to read digital books for free