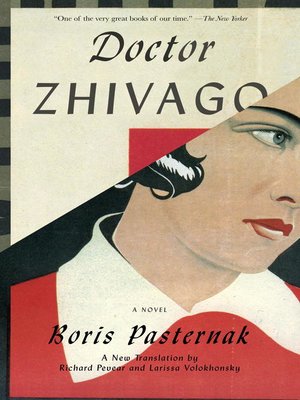 FictionLiterature
First published in Italy in 1957 amid international controversy, Doctor Zhivago is the story of the life and loves of a poet/physician during the turmoil of the Russian Revolution. Taking his family from Moscow to what he hopes will be shelter in the Ural Mountains, Zhivago finds himself instead embroiled in the battle between the Whites and the Reds. Set against this backdrop of cruelty and strife is Zhivago's love for the tender and beautiful Lara, the very embodiment of the pain and chaos of those cataclysmic times. Pevear and Volokhonsky masterfully restore the spirit of Pasternak's original--his style, rhythms, voicings, and tone--in this beautiful translation of a classic of world literature.
FictionLiterature

BORIS Leonidovich PASTERNAK won the Nobel Prize in Literature in 1958 "for his important achievement both in contemporary lyrical poetry and in the field of the great Russian epic tradition." -- the Nobel Prize committee. Pasternak had to decline ...

More about Boris Pasternak
Doctor Zhivago
Copy and paste the code into your website.
New here? Learn how to read digital books for free