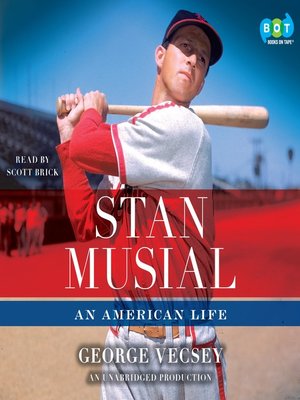 Biography & AutobiographySports & RecreationsNonfiction
When baseball fans voted on the top twenty-five players of the twentieth century in 1999, Stan Musial didn't make the cut. This glaring omission—later rectified by a panel of experts—raised an important question: How could a first-ballot Hall of Famer, widely considered one of the greatest hitters in baseball history, still rank as the most underrated athlete of all time?
In Stan Musial, veteran sports journalist George Vecsey finally gives this twenty-time All-Star and St. Louis Cardinals icon the kind of prestigious biographical treatment previously afforded to his more celebrated contemporaries Ted Williams and Joe DiMaggio. More than just a chronological recounting of the events of Musial's life, this is the definitive portrait of one of the game's best-loved but most unappreciated legends, told through the remembrances of those who played beside, worked with, and covered "Stan the Man" over the course of his nearly seventy years in the national spotlight.
Stan Musial never married a starlet. He didn't die young, live too hard, or squander his talent. There were no legendary displays of temper or moodiness. He was merely the most consistent superstar of his era, a scarily gifted batsman who compiled 3,630 career hits (1,815 at home and 1,815 on the road), won three World Series titles, and retired in 1963 in possession of seventeen major-league records. Away from the diamond, he proved a savvy businessman and a model of humility and graciousness toward his many fans in St. Louis and around the world. From Keith Hernandez's boyhood memories of Musial leaving tickets for him when the Cardinals were in San Francisco to the little-known story of Musial's friendship with novelist James Michener—and their mutual association with Pope John Paul II—Vecsey weaves an intimate oral history around one of the great gentlemen of baseball's Greatest Generation.
There may never be another Stan the Man, a fact that future Hall of Famer Albert Pujols—reluctantly nicknamed "El Hombre" in Musial's honor—is quick to acknowledge. But thanks to this long-overdue reappraisal, even those who took his greatness for granted will learn to appreciate him all over again.
From the Hardcover edition.
Biography & AutobiographySports & RecreationsNonfiction

George Vecsey, a sports columnist for The New York Times, has written about such events as the FIFA World Cup and the Olympics but considers baseball, the sport he's covered since 1960, his favorite game. He is the author of more than a dozen book...

More about George Vecsey
Stan Musial
Copy and paste the code into your website.
New here? Learn how to read digital books for free