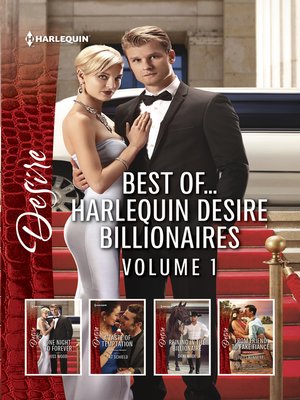 One Night to Forever - Joss Wood

Lachlyn Latimore is the long-lost Ballantyne daughter, but she wants no part of her famous family. Too bad the paparazzi missed the memo. Enter Reame Jepsen, the wealthy security expert who's vowed to keep his best friend's sister safe. Even if that means moving in, staying close and giving in to the forbidden...

A Taste of Temptation - Cat Schield

Hotelier Harper Fontaine only wants one thing in life: to take over her family's business empire. And she won't let celebrity chef Ashton Croft screw up the new restaurant in her Vegas showcase. Getting the adventurer to meet deadlines is hard enough, but turning down the flame on their uncontrollable chemistry soon proves impossible!

Reining in the Billionaire - Dani Wade

When former stable boy Mason Harrington comes into a shocking inheritance, he returns to his hometown to settle some scores. First on the agenda: take over the elite horse farm belonging to the woman who once broke Mason's heart. An added bonus: EvaMarie Hyatt has no choice but to stay on at the ranch and work for him. Soon it becomes clear Mason wants more than revenge. Will their renewed passion lead to a real second chance?

Pretending to be Jenna LeBlanc's lover should be easy for Mac O'Shea; he's dreamed about being the real thing for years. They've always shared a deep attraction, but agreed to 'just be friends.' With his questionable family business, Mac would never bring an innocent like Jenna into his dark world. But the mafia playboy can't resist the chance to touch her, to taste her - even if it's only a ruse for her sister's tropical wedding. It's just a week...in paradise...with a woman he desperately wants. What could possibly go wrong?