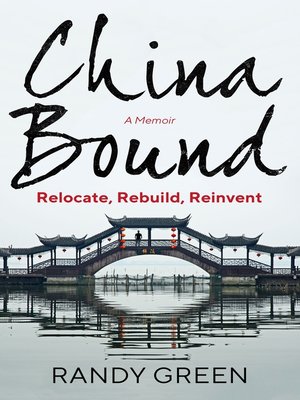 What do you do when your life has become a Disaster Zone?

If you're Randy Green, you leave your American roots behind and rebuild life, step by step, in China. On the way, you'll discover that to relocate, rebuild, and reinvent your life takes courage, acceptance, and a gradual attitude shift.

After 15 years of surviving and thriving in China, Randy Green writes about his experiences and reflections as a waiguoren (foreigner). One of the few Americans to hold the Chinese equivalent of a Green Card, Randy Green moved to China for "just one semester" to teach English to college students at Zhengzhou University — and somehow, he never left.

Now, with his book China Bound, Randy opens the door into that first year and the changes he made in his life and attitude. "Not wrong, not right, only different," he says, to explain how he copes with his new Chinese students, food, traffic, crowds, noise ... everything!

In this true story, a fresh beginning meant exploring everything in his new environment, from basic household objects and foods to the most complex social rules. It also meant reviewing his own ideas about what makes up a good life. The adventures, observations, and reflections in those first months after his arrival are described in China Bound as he followed the principles of "relocate, rebuild, reinvent".

But while (culturally) life is very different in China, as he gets to know his students better, Randy discovers that Chinese students face the intense pressures of the rapidly changing modern world just like young people around the globe. This book will not only give a glimpse into the life of an American expat in China, it allows you to understand where your Chinese friends and colleagues might be coming from.

In one book, you get entertainment, information, and inspiration. Literary references and personal reflections are mixed with over-the-shoulder observations of actual experiences and practical applications as the author learns about his new home, new life, and new culture. Chinese friends, international coworkers, travel adventures, lost-in-translation experiences, and learning to deal with the baijiu menace make every chapter a higher level of progressive discovery and enjoyment.

If you want an uplifting story of the personal renaissance of a stranger in a strange land, buy China Bound. You may even be inspired to do some reinventing in your own life.

China Bound
Copy and paste the code into your website.
New here? Learn how to read digital books for free