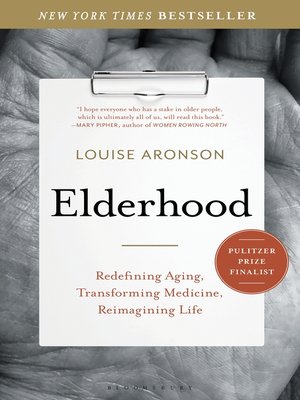 View more libraries...
Finalist for the Pulitzer Prize in General Nonfiction
A New York Times Bestseller
Longlisted for the Andrew Carnegie Medal for Excellence in Nonfiction
Winner of the WSU AOS Bonner Book Award
As revelatory as Atul Gawande's Being Mortal, physician and award-winning author Louise Aronson's Elderhood is an essential, empathetic look at a vital but often disparaged stage of life.

For more than 5,000 years, "old" has been defined as beginning between the ages of 60 and 70. That means most people alive today will spend more years in elderhood than in childhood, and many will be elders for 40 years or more. Yet at the very moment that humans are living longer than ever before, we've made old age into a disease, a condition to be dreaded, denigrated, neglected, and denied.

Reminiscent of Oliver Sacks, noted Harvard-trained geriatrician Louise Aronson uses stories from her quarter century of caring for patients, and draws from history, science, literature, popular culture, and her own life to weave a vision of old age that's neither nightmare nor utopian fantasy—a vision full of joy, wonder, frustration, outrage, and hope about aging, medicine, and humanity itself.

Elderhood is for anyone who is, in the author's own words, "an aging, i.e., still-breathing human being."