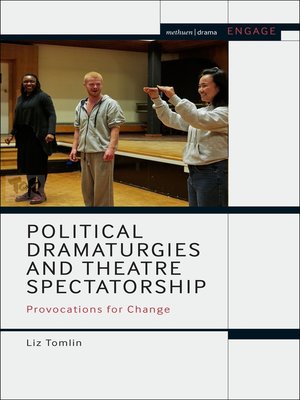 View more libraries...
What do we mean when we describe theatre as political today? How might theatre-makers' provocations for change need to be differently designed when addressing the precarious spectator-subject of twenty- first century neoliberalism? In this important study Liz Tomlin interrogates the influential theories of Jacques Rancière to propose a new framework of analysis through which contemporary political dramaturgies can be investigated. Drawing, in particular, on Ernesto Laclau and Chantal Mouffe, Lilie Chouliaraki and Judith Butler, Tomlin argues that the capacities of the contemporary and future spectator to be 'effected' or 'affected' by politically-engaged theatre need to be urgently re-evaluated.
Central to this study is Tomlin's theorized figuration of the neoliberal spectator-subject as precarious, individualized and ironic, with a reduced capacity for empathy, agency and the ability to imagine better futures. This, in turn, leads to a predilection for a response to injustice that is driven by a concern for the feelings of the subject-self, rather than concern for the suffering other. These characteristics are argued to shape even those spectator-subjects towards the left of the political spectrum, thus necessitating a careful reconsideration of new and long-standing dramaturgies of political provocation.
Dramaturgies examined include the ironic invitations of Made in China and Martin Crimp, the exploration of affect in Kieran Hurley's Heads Up, the new sincerity that characterizes the work of Andy Smith, the turn to the staging of the spectators' 'other' in Developing Artists' Queens of Syria and Chris Thorpe and Rachel Chavkin's Confirmation, and the community activism of Common Wealth's The Deal Versus the People.