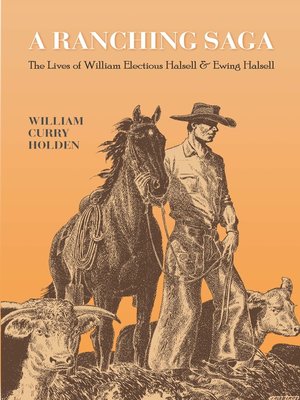 View more libraries...
A Ranching Saga tells the story of father and son pioneer ranchers in the Southwest. Around the turn of the century, William Electious Halsell and Ewing Halsell were integral to the growing ranching industry in Texas and Oklahoma. Through newspaper accounts, legal documents, personal correspondence, and interviews with family members, friends, and acquaintances, A Ranching Saga recounts the lives of these two keen businessmen, proud civic leaders, and philanthropists. What is revealed is a legacy of hard work, moral character, and compassion, as well as a close relationship with the land. Texas historian William Curry Holden sifts through correspondence, reports and statistics, and extensive research to tell of three generations of the Halsell family, from their arrival in Texas in 1854 to the mid-twentieth century.
Holden enriches the family narrative with personal accounts of the places, geology, flora, fauna, weather, economics, and history of the region. He interviewed more than 150 people to understand the characters and personalities of the two men whose cultural influence on Texas and the Southwest region spans more than a century. Illustrated with nearly two dozen drawings by José Cisneros , A Ranching Saga is the biography of family whose destiny was realized in the cattle they nurtured, the land they loved, and the people they encouraged along the way.