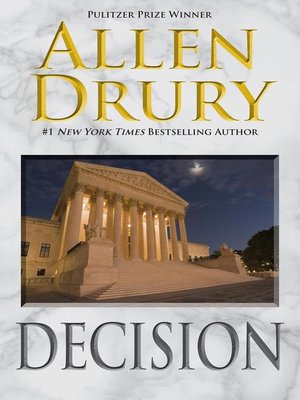 A gripping novel about the deterioration of the criminal justice system and the mysterious, powerful body at its core—the Supreme Court of the United States.

Earle Holgren—murderer, terrorist, lost soul—is the center of a vortex that sweeps up a fascinating cast of characters in their ambitions, politics, honor, and scandal. From the eight Justices of the Supreme Court, to the Attorney General of South Carolina who sees a compelling, controversial trial as an opportunity for demagoguery that might pave his path to the White House, to the idealistic defense lawyer who seeks to save a man she knows to be a psychopathic killer, to a driven Washington journalist in love with one of the Justices whose marriage is crumbling, and other Justices with their own agendas, vendettas, and secrets, Decision is a sweeping tale that begins at a nuclear power plant in South Carolina, works its way through the courts of that state, and finally to the halls of the Supreme Court.

From Allen Drury, the master of spellbinding political fiction, author of Advise and Consent

Decision
Copy and paste the code into your website.
New here? Learn how to read digital books for free