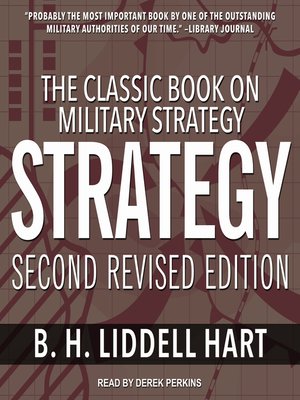 HistoryMilitaryNonfiction
This is the classic book on war as we know it. During his long life, Basil H. Liddell Hart was considered one of the world's foremost military thinkers-a man generally regarded as the "Clausewitz of the 20th century." Liddell Hart stressed movement, flexibility, surprise. He saw that in most military campaigns dislocation of the enemy's psychological and physical balance is prelude to victory. This dislocation results from a strategic indirect approach. Reflect for a moment on the results of direct confrontation (trench war in World War I) versus indirect dislocation (Blitzkreig in World II). Liddell Hart is also tonic for business and political planning: just change the vocabulary and his concepts fit.
HistoryMilitaryNonfiction

B. H. Liddell Hart, (1895-1970) was a British soldier, military historian, and military theorist. His books include Scipio Africanus, Sherman, Why Don't We Learn from History?, and A History of the First World War.

More about B.h. Liddell Hart
Strategy
Copy and paste the code into your website.
New here? Learn how to read digital books for free