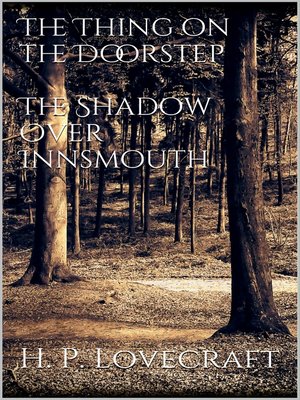 The Thing on the Doorstep, the Shadow Over Innsmouth

FictionHorror
During the winter of 1927-28 officials of the Federal government made a strange and secret investigation of certain conditions in the ancient Massachusetts seaport of Innsmouth. The public first learned of it in February, when a vast series of raids and arrests occurred, followed by the deliberate burning and dynamiting-under suitable precautions-of an enormous number of crumbling, worm-eaten, and supposedly empty houses along the abandoned waterfront. Uninquiring souls let this occurrence pass as one of the major clashes in a spasmodic war on liquor. Keener news-followers, however, wondered at the prodigious number of arrests, the abnormally large force of men used in making them, and the secrecy surrounding the disposal of the prisoners. No trials, or even definite charges were reported; nor were any of the captives seen thereafter in the regular jails of the nation. There were vague statements about disease and concentration camps, and later about dispersal in various naval and military prisons, but nothing positive ever developed. Innsmouth itself was left almost depopulated, and it is even now only beginning to show signs of a sluggishly revived existence.
FictionHorror

The Thing on the Doorstep, the Shadow Over Innsmouth
Copy and paste the code into your website.
New here? Learn how to read digital books for free