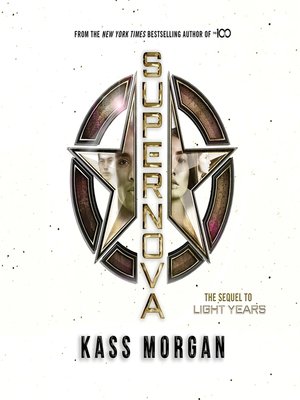 RomanceScience FictionYoung Adult FictionYoung Adult Literature
Kass Morgan, New York Times bestselling author of The 100, once again delivers pulse-pounding action and glittering romance in this thrilling sequel to Light Years. Tensions are rising between the Quatrans and the Specters, and the Quatra Fleet is gearing up for an epic fight. With a galaxy on the brink of war and loyalties divided, the friendship of four cadets will be tested. Orelia has been arrested for espionage, and her future is looking bleak . . . until the Quatrans make her a surprising offer that could save her life—and the lives of everyone in the galaxy. Reeling from his breakup, Arran finds comfort in a sympathetic boy from Loos, someone who understands how hard it can be to fit in. But is it enough for Arran to forget his heartbreak?Cormack's position at the Academy is finally secure. But when someone discovers his treasonous secret, it jeopardizes everything he's fought for, including his relationship with the person he cares about most.And Vesper is ready to become a superstar officer . . . until she uncovers a conspiracy that shakes her faith in the Quatra Fleet to its core. As secret machinations come to light, these cadets will be forced to overcome their differences and band together to restore peace to their worlds.
RomanceScience FictionYoung Adult FictionYoung Adult Literature

Kass Morgan received a BA from Brown, where she studied history and literature, and a master's degree from Oxford, where she learned how to queue and walk on cobblestones in high heels. She currently works as an editor and lives in Brooklyn, where...

Supernova
Copy and paste the code into your website.
New here? Learn how to read digital books for free