Nobody Does it Better 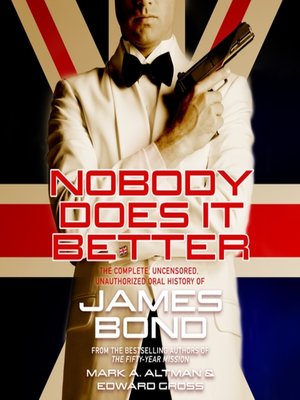 The ultimate oral history of the only gentleman secret agent with a license to kill... and thrill...telling the incredible, uncensored true stories of the James Bond franchise and spy mania.

For over five decades, the cinematic adventures of James Bond have thrilled moviegoers. Now, bestselling authors Mark A. Altman and Edward Gross take you behind-the-scenes of the most famous and beloved movie franchise of all-time filled with reflections from over 150 cast, crew, critics and filmmakers who reflect on the impact of this legendary movie franchise as well as share their thoughts about their favorite (and least) favorite 007 adventures and spy mania which gripped fans the world over in the wake of the success of the James Bond films.

From Russia—with love, course—to Vegas, from below the bright blue waters of the Bahamas in search of a missing nuclear weapon to the top of the Golden Gate Bridge, from below the seas in Stromberg's new Noah's Ark of Atlantis into orbit with Hugo Drax, Nobody Does It Better: The Complete Uncensored, Unauthorized Oral History of James Bond tells the amazing, true story of the birth of James Bond through the latest remarkable James Bond adventures as well as the Spy mania classics that enthralled the world.

It's Bond and Beyond from the critically acclaimed authors of the bestselling The Fifty-Year Mission and So Say We All.

Biography & Autobiography Performing Arts Nonfiction
Nobody Does it Better