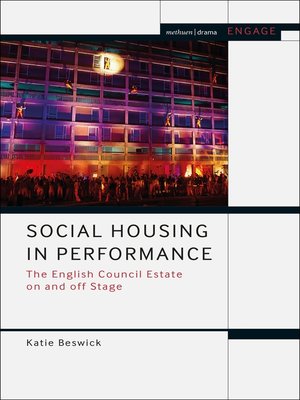 View more libraries...
This book explores the ways that council estates have been represented in England across a range of performance forms. Drawing on examples from mainstream, site-specific and resident-led performance works, it considers the political potential of contemporary performance practices concerned with the council estate. Depictions of the council estate are brought into dialogue with global representations of what Chris Richardson and Hans Skott-Myhre call the 'hood', to tease out the specific features of the British context and situate the work globally.
Katie Beswick's study provides a timely contribution to the ongoing national and global interest in social housing. As the housing market grows ever more insecure, and estates are charged with political rhetoric, theatre and socially engaged art set or taking place on estates takes on a new potency. Mainstream theatre works examined include Rita, Sue and Bob Too and A State Affair at the Soho Theatre, Port at the National Theatre, and DenMarked at the Battersea Arts Centre. The book also explores the National Youth Theatre's Slick and Roger Hiorns' Seizure, as well as community-based and resident led performances by Fourthland, Jordan McKenzie, Fugitive Images and Jane English.