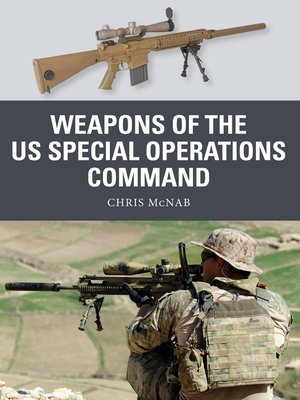 Weapons of the US Special Operations Command

HistoryMilitaryNonfiction
The units and formations of the US Special Operations Command (SOCOM) have privileged access to the finest weaponry in the world's arsenal. Whether Army, Navy, Air Force, or Marines, the SOCOM troops select weapons that match their mission requirements, but which also sit at the cutting edge of combat technology.

This means that, while SOCOM troops frequently use standard-issue weaponry, they also adopt many specialist pieces of kit that are not so accessible to the broader armed services, including sniper rifles, battle rifles, and machine guns, as well as high-tech tactical accessories used to transform standard weaponry into something exceptional.

Assessing the technology and capabilities of these combat weapons, as well as how they have been used in modern combat, this fully illustrated study lifts the veil on some of the most distinctive hand-held weapon systems of US special operations forces since 1987.
HistoryMilitaryNonfiction

Dr Chris McNab is an author and historian who specializes in military history and related technology. Over the course of his twenty-year career, he has written more than one hundred titles, almost all with international distribution. Chris has als...

More about Chris McNab
Weapons of the US Special Operations Command
Copy and paste the code into your website.
New here? Learn how to read digital books for free