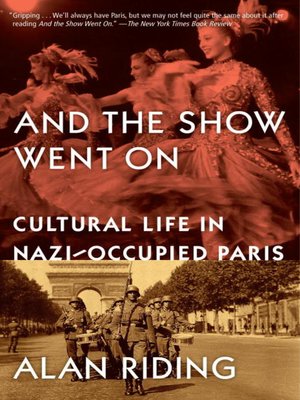 And the Show Went On

On June 14, 1940, German tanks rolled into a silent and deserted Paris. Eight days later, a humbled France accepted defeat along with foreign occupation. The only consolation was that, while the swastika now flew over Paris, the City of Light was undamaged. Soon, a peculiar kind of normality returned as theaters, opera houses, movie theaters and nightclubs reopened for business. This suited both conquerors and vanquished: the Germans wanted Parisians to be distracted, while the French could show that, culturally at least, they had not been defeated. Over the next four years, the artistic life of Paris flourished with as much verve as in peacetime. Only a handful of writers and intellectuals asked if this was an appropriate response to the horrors of a world war.

Alan Riding introduces us to a panoply of writers, painters, composers, actors and dancers who kept working throughout the occupation. Maurice Chevalier and Édith Piaf sang before French and German audiences. Pablo Picasso, whose art was officially banned, continued to paint in his Left Bank apartment. More than two hundred new French films were made, including Marcel Carné's classic, Les Enfants du paradis. Thousands of books were published by authors as different as the virulent anti-Semite Céline and the anti-Nazis Albert Camus and Jean-Paul Sartre. Meanwhile, as Jewish performers and creators were being forced to flee or, as was Irène Némirovsky, deported to death camps, a small number of artists and intellectuals joined the resistance.

Throughout this penetrating and unsettling account, Riding keeps alive the quandaries facing many of these artists. Were they "saving" French culture by working? Were they betraying France if they performed before German soldiers or made movies with Nazi approval? Was it the intellectual's duty to take up arms against the occupier? Then, after Paris was liberated, what was deserving punishment for artists who had committed "intelligence with the enemy"?

By throwing light on this critical moment of twentieth-century European cultural history, And the Show Went On focuses anew on whether artists and writers have a special duty to show moral leadership in moments of national trauma.

For twelve years, Alan Riding was the European cultural correspondent for The New York Times. He was previously bureau chief for the Times in Paris, Madrid, Rio de Janeiro and Mexico City. Riding is the author of Distant Neighbors. He continues to...

More about Alan Riding
And the Show Went On
Copy and paste the code into your website.
New here? Learn how to read digital books for free