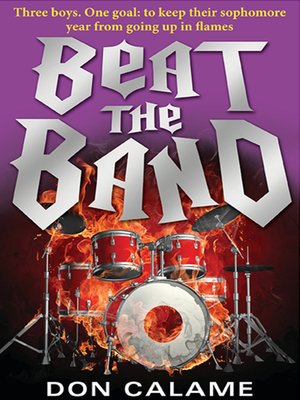 Get ready for riffs on hot girls, health class, and social hell! The outrageously funny boys from SWIM THE FLY return to rock their sophomore year. (Ages 14 and up)

In this hilarious sequel to SWIM THE FLY, told from Coop's point of view, it's the beginning of the school year, and the tenth-grade health class must work in pairs on semester-long projects. Matt and Sean get partnered up (the jerks), but Coop is matched with the infamous "Hot Dog" Helen for a presentation on safe sex. Everybody's laughing, except for Coop, who's convinced that the only way to escape this social death sentence is to win "The Battle of the Bands" with their group, Arnold Murphy's Bologna Dare. There's just one problem: none of the guys actually plays an instrument. Will Coop regain his "cool" before it's too late? Or will the forced one-on-one time with Helen teach him a lesson about social status he never saw coming? With ribald humor and a few sweet notes, screenwriter-turned-novelist Don Calame once again hits all the right chords.

I grew up in Hicksville, (that's right, Hicksville) New York. It's a town on Long Island that's basically Levittown-light. We had all the charm of the 1950s' cookie-cutter houses without the posh Levitt name. My mother, brother, sister, and I live...

More about Don Calame
Beat the Band
Copy and paste the code into your website.
New here? Learn how to read digital books for free