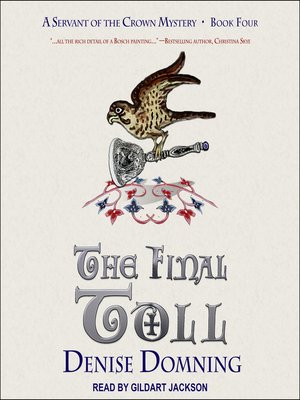 FictionLiteratureMysteryHistorical Fiction
RING FOR THE ANGELS! Sir Robert of Offord dies mysteriously just after accusing his new wife of adultery and his son-by-marriage wants the shire's new Crowner to prove the knight was murdered. Instead, Sir Faucon de Ramis discovers that a bell owned by the dead man is missing. But who could have taken it-the daughter who loved it as a child, the knight who wants it as collateral, or the prior who wishes to restore it to its holy purpose of calling the angels? Follow Warwickshire's new Servant of the Crown as Sir Faucon embarks on his most unusual and convoluted hunt yet.
FictionLiteratureMysteryHistorical Fiction

Denise Domning is the author of the Servant of the Crown Mystery series. She lives on a small farm on Oak Creek in northern Arizona. Visit her at denisedomning.com.

More about Denise Domning
The Final Toll
Copy and paste the code into your website.
New here? Learn how to read digital books for free