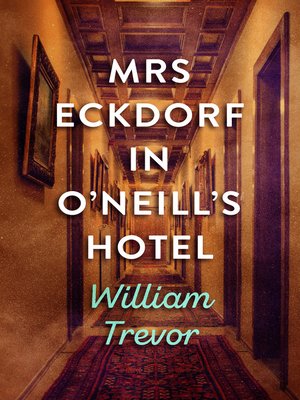 Classic LiteratureFictionLiteratureHumor (Fiction)
The denizens of a crumbling Dublin hotel are the subject of a meddling photographer in this Booker Prize–shortlisted "masterpiece" (Irish Times).
Once a flourishing establishment, O'Neill's Hotel has fallen on hard times. The same could be said for the people who live there. Among them are Mrs. Sinnott, the elderly, deaf, and mute proprietor; her drunkard son, Eugene; Morrissey, a small-time pimp; and the grim, lone porter O'Shea. But what might sound bleak to some holds irresistible allure for globetrotting photographer Ivy Eckdorf.

Hearing stories of O'Neill's Hotel from an ocean liner barman, Eckdorf catches the unmistakable whiff of human interest. Surely some tragic story hides within this crumbling corner of Ireland. Now she intends to uncover that story, frame it just so, and turn it into her next coffee table book. Though she has no connection to these hard-luck souls, she has arrived. And no one's life will be the same—not even hers.

"An astounding richness of pathos, humour and tragedy." —Francis King

"A small work of art [that] reaches antic heights." —The New York Times

William Trevor KBE was an Irish novelist, playwright, and short story writer. One of the elder statesmen of the Irish literary world, he is widely regarded as one of the greatest contemporary writers of short stories in the English language.

More about William Trevor
Mrs Eckdorf in O'Neill's Hotel
Copy and paste the code into your website.
New here? Learn how to read digital books for free