A Thing of State 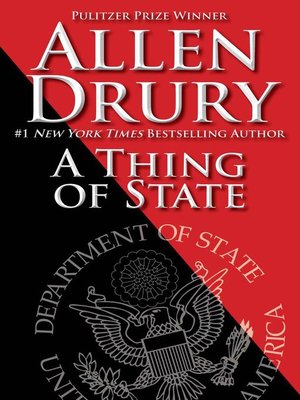 In the conduct of foreign policy, a President must never utter threats he can't—or won't—enforce, make promises he can't—or won't—keep, or renege on commitments to his allies.
This classic political thriller by Pulitzer Prize-winning master Allen Drury is as insightful and relevant today as when it was first published.
Secretary of State Raymond Cass Stanley struggles to help the U.S. President avoid a potentially disastrous head-on collision with Sidi bin Sidi bin Sidi, President for Life of All the Peoples of Lolómé, a tiny Middle Eastern country. Sidi has recently acquired several nuclear weapons and threatens to deploy them against his even tinier neighbor, Lesser Lolómé, and the President is determined to take him down.
This clash among proud and defiant leaders, and the repercussions worldwide among US allies and enemies, forms a sophisticated and fascinating novel of present-day politics and international tensions.
No author has ever portrayed American and world politics with more vivid reality and understanding than Allen Drury.