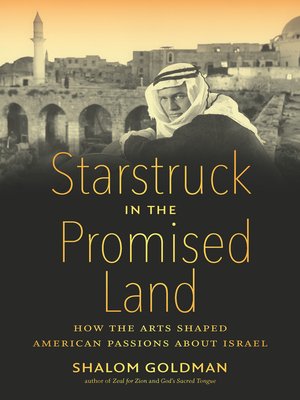 Starstruck in the Promised Land

How the Arts Shaped American Passions about Israel

HistoryPoliticsSociologyNonfiction
From the days of steamship travel to Palestine to today's evangelical Christian tours of Jesus's birthplace, the relationship between the United States and the Holy Land has become one of the world's most consequential international alliances. While the political side of U.S.-Israeli relations has long played out on the world stage, the relationship, as Shalom Goldman shows in this illuminating cultural history, has also played out on actual stages. Telling the stories of the American superstars of pop and high culture who journeyed to Israel to perform, lecture, and rivet fans, Goldman chronicles how the creative class has both expressed and influenced the American relationship with Israel.
The galaxy of stars who have made headlines for their trips includes Frank Sinatra, Johnny Cash, Leonard Bernstein, James Baldwin, Barbra Streisand, Whitney Houston, Madonna, and Scarlett Johansson. While diverse socially and politically, they all served as prisms for the evolution of U.S.-Israeli relations, as Israel, the darling of the political and cultural Left in the 1950s and early 1960s, turned into the darling of the political Right from the late 1970s. Today, as relations between the two nations have only intensified, stars must consider weighty issues, such as cultural boycotts, in planning their itineraries.
HistoryPoliticsSociologyNonfiction

Shalom Goldman, a popular opinion writer on U.S.-Israeli affairs and librettist of Philip Glass's opera Akhnaten, is professor of religion at Middlebury College. Among his books are Zeal for Zion and God's Sacred Tongue.

More about Shalom Goldman
Starstruck in the Promised Land
Copy and paste the code into your website.
New here? Learn how to read digital books for free